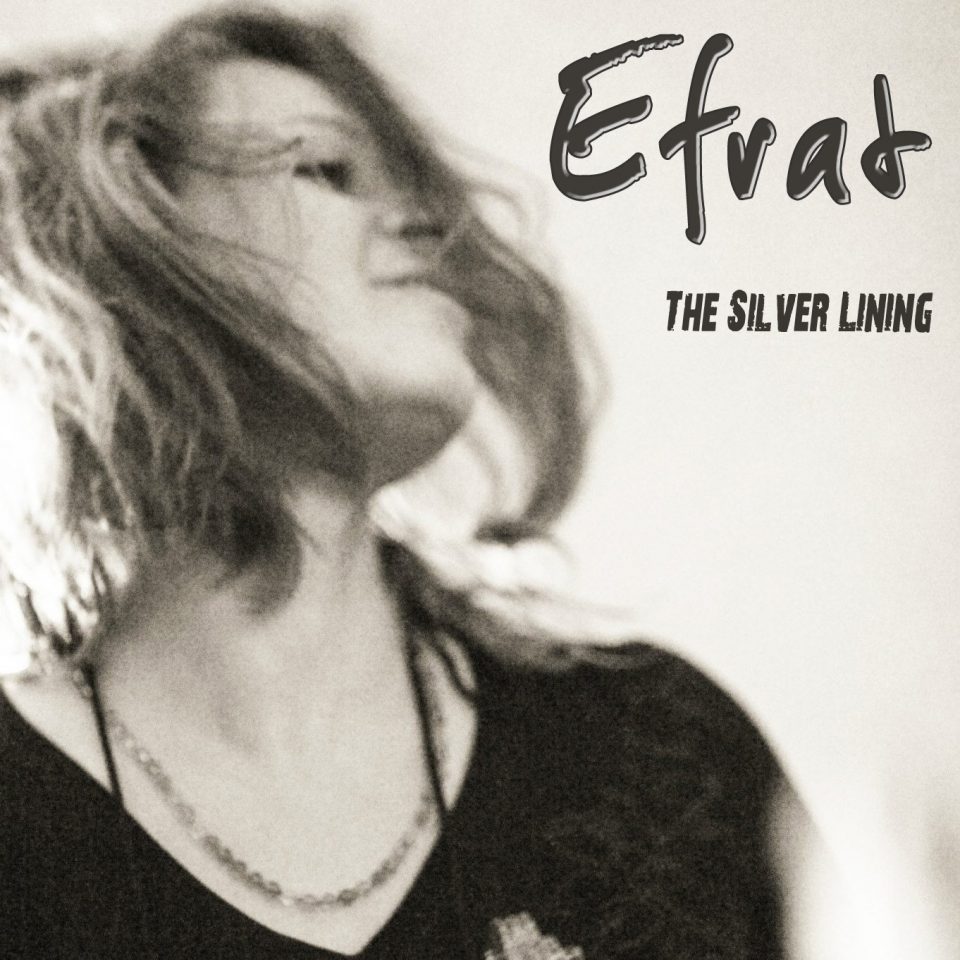 The songs on Efrat’s sophomore release, The Silver Lining, are a blend of many styles – including folk, jazz, pop, klezmer, swing, and blues. Their lyrics and structure are a testament to finding strength during the trials of life and leaning on community.

Efrat is a professional violinist, violist, singer, arranger and composer with performance experience in many styles and situations. She resides in New York and works as a performing artist and teacher.

The songs on Efrat’s sophomore release, The Silver Lining, are a blend of many styles – including folk, jazz, pop, klezmer, swing, and blues. Their lyrics and structure are a testament to finding strength during the trials of life and leaning on those around you for help.

Efrat Shapira took up the violin at age 7 and was immediately drawn to the beauty within the variation of so many musical styles. Three years later, she became the youngest person to play solo with the Oak Ridge Symphony, and at age 11 was the youngest person ever admitted into the Knoxville Youth Orchestra. As her musical studies progressed, she was especially enthralled by groups like the Kronos Quartet who were blending jazz, classical, and African musical styles, but also enjoyed everything from Mozart to Madonna (who remains one of her idols today). She learned klezmer and Israeli music from her father, dabbled in folk and rock with a cellist-singing buddy who lived down the street, and took every opportunity to learn and play bluegrass, country, and any other genre with which she came into contact. Accepted into and offered full scholarships by the top classical violin schools in the country, Efrat settled on Indiana University. While pursuing her BA there, she also was a member of the Shira Festival Orchestra in Israel, conducted by Zubin Mehta under the direction of Lorin Maazel. After a forced break from music due to injury, she resumed her studies at the University of Tennessee, from which she received a master’s degree in Music Performance. During this time, she also established her first group as a bandleader and was the first violinist in The Rusty Strings jazz quintet (led by Rusty Holloway).

After graduation, Efrat, who grew up in the South and is featured in the book Cumberland Avenue Revisited, an anthology about four decades of music in Knoxville, Tennessee, moved to NYC to continue her career in music. After a stint as concertmaster for Olivia Newton John Orchestras, she re-established the Jade Quartet that has recorded for such notables as Ashanti and Bobbie Eakes (All My Children, One Life to Live soap operas). Efrat also pursued her love of singing and jazz with No Strings Attached, her debut CD. She began recording it in 2007 but then toured 47 states and Canada as an onstage violinist in the Broadway touring company of Oliver, for which she received rave reviews. Meanwhile, the title track for No Strings Attached was included in the movie soundtrack for How To Seduce Difficult women and featured in its trailer that garnered more than eight million views or listens worldwide.

At this point, Efrat became a new mother, took a break from being a bandleader, and then was recruited into the alt-roots ensemble Spuyten Duyvil for a few years. She also worked with and recorded for other bands. She’s now back focusing on her own creative musical pursuits and feeling rejuvenated after finding the silver lining in life.

“A lovely recording… I just fell in love with the music!”
Ron Olesko – WFDU

“Once in a while, I get the opportunity to record with a person that his it going on musically on all fronts, meaning, talent as an instrumentalist and vocalist. And then there’s the once every 10 year person that has that going on and is also a gifted songwriter. Well Efrat is all the above, with a smooth vocal sound capable of a wide range of material and classically trained violin chops. The songs on this album that she has written are better in my opinion that the cover songs she chooses (which are classics). The best part is, these sessions went down live for the most part (all the string sections were composed by Efrat and of course, she couldn’t play all the parts at once). I know you’ll enjoy listening to this album as much as I do, as its a favorite in my car stereo!”
— Bob Harris – Record Producer/Guitarist (Johnny Cash, Vassar Clements)

“This is a truly beautiful album. Efrat is a very accomplished violinist and her sultry voice brings the messages across on every song she sings. The material encompasses many aspects of one’s life going through birth to old age. This is a journey that one will delight in listening to. The styles are diverse ranging from pure country to folk creating a multi colored tapestry never leaving the listener bored.”
— Joel Diamond (grammy nominated composer, producer, & pianist, testimonial

About the Songs on The Silver Lining:

1. Before You Were Born (3:04)
Written by Eric Harrison, this lyrically funny folk/folk-rock song about the realizations of becoming a parent also has a bit of a country feel to it. Jeff Tobey is featured on harmonica, while Efrat plays violin.

2. Bring Me Peace (3:23)
Written on the day of the tragic shooting at Sandy Hook Elementary School in Connecticut, this song is a testament to the fact that what one goes through the world goes through, and compassion can bring peace. Lush string parts accompany a very sparse guitar sound, an emotional vocal melody, and very folky vibe.

3. Keep On The Sunny Side (3:13)
This A.P. Carter classic, originally made famous by the Carter family, has Appalachian mountain roots. Bluegrass- and folk-flavored, it features Jeff Tobey on harmonica and Efrat on viola.

4. The Silver Lining (3:37)
The album’s title track is about finding the good in life… because it’s always there; you just have to find it. Featuring Efrat on violin and John Carlini (David Grisman) on guitar, it is a jazz-tinged folk song.

5. Serenade (3:21)
An instrumental piece written for an unrequited love – the one about whom you always wonder “What if?” – this song contains elements of jazz and romantic era classical music, along with a 6/8 Latin beat. It features Efrat on violin, John Carlini on guitar, and Rusty Holloway (Sarah Vaughan, Stan Getz, Woody Herman) on bass.

6. Are You Worthy (4:07)
Reminiscent of Leonard Cohen’s later work, this song has elements of folk
and gypsy music, with a Latin beat taunting the rock beat above it. Efrat and Jeff Tobey have dueling improve solos and are joined by guest drummer Steve Holloway (Riverdance) and singers Katherine Etzel and Jen McDearman of Bobtown. Lush string arrangements round out this composition.

7. Chance (4:06)
Set to a 1970s folk-rock groove, this song questions the meaning of it all and poses the question: Is it fate or chance? Gypsyesque violin coincides with a bluesy harmonica as they soar into improv at tandem.

8. Love Kicked The Devil (2:28)
Blues coming at you! Jeff Tobey is featured on harmonica, with his bluesy, soulful harp rounding out each verse. An instrumental break between the bass, guitar, violin, and harmonica parallels this as a tag on each chorus.

9. Solitary (2:55)
Efrat describes the album’s second instrumental as a fight of sorts — about trying to figure out where one belongs. It’s the tale of the classical violinist who dabbles in country and folk being torn between that world and the jazz world. Featuring improvisational solos by Efrat on violin, John Carlini on guitar and Rusty Holloway on bass, the song has an A B A form with Brahmsian chordal resolutions in the A part juxtaposing a swinging jazzy B part.

10. SOS (3:28)
A song of hope and relief that you can’t help but play along to, it features Efrat on her gypsy meets dance club violin. Accompanying her throughout are both a groovy electric bass line and the swinging string quartet with a low bass line.

11. Heaven Down Here (2:37)
This cover song’s sentimentality and beauty may leave some wondering how comedic actor Jim Carrey could have contributed to its lyrics. John Carlini (guitar) and Rusty Holloway (bass) join Efrat (viola).

12. Turn, Turn, Turn (3:06)
It’s the classic Coke with a twist of lime — a straight-ahead version without the usual instrumental improvisations almost always incorporated into Efrat’s arrangements. Conversely, here she uses her knowledge of strings to instead create a fanfare bookending this wonderful Pete Seeger classic, with a string quartet arrangement of its well-known chorus.